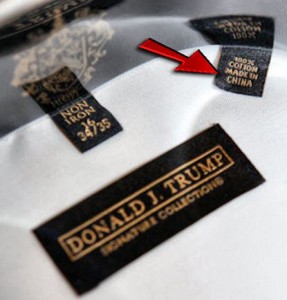 Having already provided the facts dealing specifically with Donald Trump getting almost all of the details wrong in regard to Mondelez International in Chicago, this is a good time to address the underlying issue: the exporting of American manufacturing jobs to other countries.

As this is usually an issue of concern to Democrats running for office, it is nonetheless still legit.  The problem with Donald Trump raising this issue is simply this: he is as guilty of outsorucing as anyone.  Case in point: the Donald J. Trump Signature Collections which as you can see in the photo above…are made in China.  At least Mitt Romney had the decency to bury his hypocrisy deep within the venture capital firm that did his bidding.  Trump, as with everything else,  puts his name on it.

When it comes to concern about corporate outsourcing of American manufacturing jobs and Donald J. Trump: Hyp Hyp Hypocrisy.