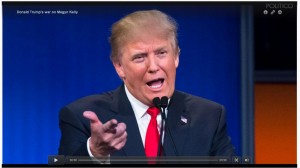 POLITICO:  Donald Trump: Megyn Kelly should apologize to me

So Donald Trump doesn’t have the time for “Political Correctness?”  Fine.  Can’t he at the very least spare a second or two not be an absolute douche?

I guess I would be willing to give him the benefit of the doubt over an issue like  The NFL’s Washington “Red Slurs,” but when it comes to the accepted norms of basic human interaction , is it too much to ask the guy not be an absolute and total Dick, every time he opens his trap?

He’s like an overgrown  8 year old, spoiled  and enabled by adults who didn’t love him enough.  ‘I’ve been pretty nice to you but I won’t be now because you’re mean.  You were mean to me. Waa. Waa. Waaaaaa.’

He’s very very rich.  I know this to because he keeps telling me.  He has his own Boeing jet and penthouses all over the world.  He’s married to his third super model in less than thirty years.  He’s got chauffeurs and “people” everywhere he goes.  How is it THIS GUY can’t carve out just a few moments once in a blue fracking moon not to be a total douche bag?

I doubt very strongly that he could ever get elected President of the United States but he easily wins the race  for President of DoucheLand.

Or is that “The Doucheland?.”