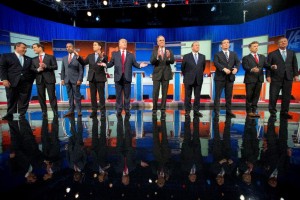 Who do I owe for this photo?

It’s silly season in presidential politics right now, with a cricus clown leading the pack and people asking seriously if it’s for real?  No. It’s not.  We haven’t even bused voters in for the Iowa Straw Poll yet.  Michele Bachman won that one last cycle and took the lead. Then Herman Cain stepped up for a few.  Then New Gingrich was the guy and Rick Santorum actually won Iowa and then guess what? The guy everyone knew was going to get the gig all along, got the gig.  Past performance is not always a guarantee of future pain, but in this case…

And while I am talking to myself I might as well chime in on Scampagin 2016. “Scampaign,” btw,  is an unregistered trademark of Comedy USA, which is actually trademarked itself on the Secondary Registry of  Federal Trademarks. That and a ton of legal bills would enable me to prevent others from using that name commercially. At the moment, I’m not interested in big legal bills. And I own all the web URLs.

Back to the first “Debate”.

In a nutshell, the media is telling me to think Carly Fiorina was the superstar of the bringer show while either Trump, Rubio, Carson. Kasich, Bush, Walker, Huckabee, Christy or Don Rickles stood a little taller than the rest at the late show. Or that nobody did.

Here’s what I heard from Carly Fiorina: On my first day, I will start a war and make sure Bibi Netanyahu knows this president will be his bitch. Corporations are my kinda of people and remember folks: it’s government largess that’s depriving you of a future, not the rate of our executive pay compared to everyone else’s.  And then of course she added “Rah, USA, Rah” “Conservative, Rah, USA ,Rah.”

Jeb? A bit goofy? No? Of course all his stats on Florida’s economic success drew the line at the moment he left the building, conveniently ignoring a total economic collapse in his aftermath. Seems to be a family trait? No?

Trump? He’s the candidate for people who found George W Bush “too intellectual”.
He’s just a mean spirited crabby face . He’s Incredibly thin skinned. And remember: he made his fortune building skyscrapers in New York City with concrete.  And who was selling concrete in those days? I’m not saying he knew Tony Soprano. But if Tony Soprano was real, Trump would have.

Rand Paul? His strategy was clearly to attack Trump or anyone else getting attention and win the spotlight in the process. Bad news Rand. I believe I am the only one who noticed. I also write blogs for nobody. And do you use Jerry Curl?

Mike Huckabee? If you like his show on Fox …he’ll be right back.

Marco Rubio? His Mother and Father both worked on the work farm, every day, every night and every sentient moment of his childhood and life. It’s the story of a small town boy….zzzzzzzzzz.  Got it.

Chris Christy? The press conference format was the perfect set up for him. It’s where he excels in his day job and did so last night, too.  If you didn’t know New Jersey placed 44 out of the 50 States in job growth on his watch, he would have you believing he was number two with a bullet. He is right about part of that equation.

Finally, what was with the live mic post show comments from the GOP American Idol judges/panelists?

Hey Bret Baier, on my set, the wife said you looked orange.  Megyn Kelly, you are what makes Fox News, Fox News and Chris Wallace, are you really going to vote for any one of those people?  Of course you are.

More soon.
Or not.